My collaborations with ELSI form the heart of my experiments into geochemical conditions that promoted the formation of oligomers and polymers on the early Earth. Over the past 60 years, hundreds of experiments have demonstrated that there are many pathways for generating simple compounds that make up life. These synthesis pathways are driven by diverse energy sources, including lightning bolts, infalling meteorites and comets, solar and galactic radiation, reactive minerals and hydrothermal vents. The compounds produced include amino acids, sugars and carboxylic acids, which make up key molecules related to genetics and metabolism. But the picture is far from complete- the most important biological molecules are long, delicate chains of these compounds called polymers. Though we can imagine conditions that create the links of the chains, recent research has turned to the conditions that link chains end-to-end without creating cross-linked, non-reactive tar. 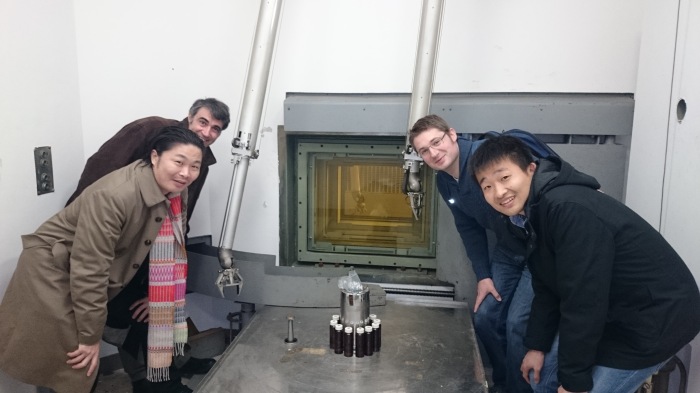 Visiting the Cobalt 60 Gamma Radiation Facility at the Tokyo Institute of Technology. Don’t worry- the gamma source is lowered into the ground while we are in the room.

At ELSI, I work with a team of scientists to create experiments that mimic energy transfer from radioactive minerals into compounds likely to have been found on the early Earth such as nitrogen, water, and methane. We use a source of gamma rays from an element called Cobalt-60, located on the campus of the Tokyo Institute of Technology. Our preliminary results are very promising- our team has already found a pathway that enables the production of special solvents that promote the formation of polymers far better than water. We are now investigating whether we can use gamma radiation to release phosphate from its mineral form, and then turn that phosphate into larger, more reactive compounds. My relationship with ELSI and the ability to run experiments at the Cobalt 60 Gamma Radiation Facility is an extraordinary opportunity to advance our understanding of radiation geochemistry.

My research focuses on the decay energy emitted by radioactive minerals. The motivation for investigating radioactive decay and its ability to drive chemical synthesis reactions is that different forms of energy are not equal; some are better at inducing chemical reactions than others. At a top level, this can be thought of as an attribute of entropy. Comparing the entropies of different energy sources is a difficult task, since we don’t understand exactly how to quantify entropy as a universal, physical attribute in all contexts. But we can readily observe these attributes. Radioactive energy starts as a moving particle but is converted into a complex mix of X-rays, UV radiation, visible light, scattered electrons, free radical fragments and heat as it interacts with reactants. The complex interactions that occur as the particles dissipate their energy gives rise to many interesting intermediate states that can be directed to the production of prebiotic molecules.